Etcher has bricked my SD card and USB

Hello. I used Etcher to flash linux mint to a flashdrive. The app said it succeeded so i restarted my 2014 mac mini with the option key pressed down. The computer did not give me the option to boot from the usb. I went back into macOS and checked around the disk utility. The usb would not mount anymore. I had also tried a micro sdcard in an sdcard adapter. Etcher said it was successful, restarted again and i still didint work. So now i know my devices are bricked so i look for solutions. I tried using refus but that failed with both devices… So what do i do? Dont say they just happen to fail and that very time because if you google this problem its widespread. If the software is doing this it needs to be pulled and fixed. Dont keep this on the website where it can mess up someone device

Did you try any of the methods described in this blog post? 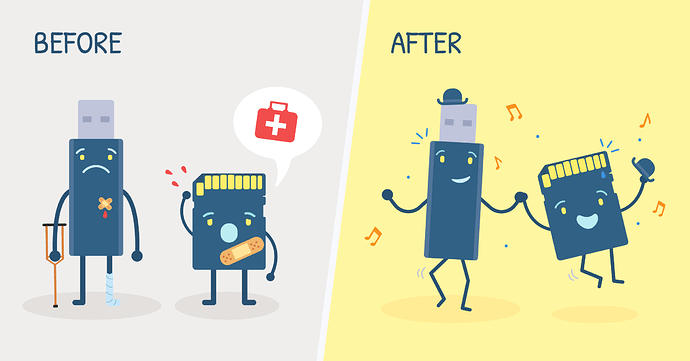 Etcher broke my USB stick … or did it?

SD cards go through a lot of hard work and sometimes they fail. Learn how to recover a broken USB drive or SD Card that doesn’t seem to work.

I hope this helps.

I am glad you are worried about others, but etcher itself is not able to make a hardware unusable.
An operating system not able to show a device does not mean it is bricked. We ourselves use etcher every day without problems.

Thank you for the link I will try it when I get a chance. This is a strange thing for the app to do. I noticed when I used it on my windows tablet I never had this problem. Only just now when I used it on Mac Os